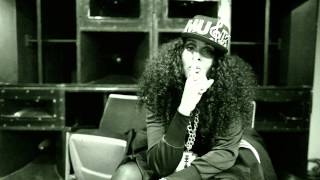 The Brooklyn native with Trinidadian roots, who has also written and contributed vocals for reggae crossover albums from Gyptian, Snoop Lion and Major Lazer, shot this video at NYC’s iconic graffiti mecca 5 Pointz. Directed by Jeff Pliskin of Raised Fist Propaganda, “One Shot” is the last video on record to be filmed at this iconic block-long public art space in Long Island City (Queens). Just weeks before, the factory building’s graffiti exterior was painted white to make way for a new real estate development.

The artistic backdrop for “One Shot” reflected New York City’s history of graffiti artists. Hunte – who won a Grammy for co-producing and writing Jay Z ‘s “Empire State of Mind” feat. Alicia Keys – parallels the fame of the visual artists at 5 Pointz, whose names will be remembered at this turning point in NYC art history.

This is just the beginning for Hunte. With the help of producers Major Lazer, Supa Dups, Di Genius, Grind Music and Jerry Wonda, she is currently putting the final touches on her debut album due in Spring 2014.