Singer/songwriter Duane Stephenson greatly impacted upon Jamaica’s musical landscape with the release of his stunning introductory album “From August Town” on Cannon/VP Records in early 2008, demonstrating that the heartfelt lyrics, sincere vocals, insightful commentaries and deeply rooted spirituality that made roots reggae a global force lives on in the 21st century. From the exquisite remake of the late Tyrone Taylor’s mid-80s lovers rock lament “Cottage In Negril” to the brilliant title track “August Town”, a contemplative tale of intermittent war torn conditions in the Kingston community where Duane was born and currently resides, “From August Town” reaped critical accolades. It was cited by Billboard Magazine as one of six albums “collectively galvanizing a roots reggae revival” with “lyrics that convey romantic longings and the anguish of ghetto realities with equal conviction” and similarly hailed by Pitchfork.com as “undoubtedly a highlight of not just 2008, but perhaps the past few years.”

Following the release of “From August Town” Duane performed on several major stage shows across Jamaica, including Reggae Sumfest and the Jamaica Jazz and Blues Festival and toured throughout North America, Europe and the Caribbean with Dean Fraser, the celebrated saxophonist and leader of the Blak Soil Band that supports Tarrus Riley, as well as the producer of “From August Town”; as Duane recruited new fans by performing various selections from his debut album in cities throughout the world, fans and critics alike eagerly awaited another album from this exceptionally gifted artist. And now, following a year of intense work in the recording studio, Cannon Music/VP Records will release Duane’s much anticipated sophomore album “Black Gold” on September 14.

“After the release of “From August Town,” Duane explained while working at Kingston’s Grafton Studios, where most of the album’s vocal tracks and overdubs were done, “I started to travel, meet new people and have new experiences; there is so much growth mentally, emotionally, and musically, I tried to encompass that growth into the songs on Black Gold.”

Throughout “Black Gold” Duane’s supple tenor displays poised assurance and versatility, whether he is illuminating harsh global realities, supported by the authoritative speech of respected dub poet Mutabaruka on the acoustic “Truth Is” or rejoicing in the mystical vibes of “Jah Works”; good-naturedly competing with Gramps Morgan for a woman’s affections on the country-tinged “Rescue Me” or dispensing advice, alongside the regal Queen Ifrica, to a wayward young girl to “Stay At Home”, while retaining the soulful essence of Dennis Brown’s original. The title “Black Gold” was chosen because “it is a representation of self worth as a black person and by extension Africa,” he says. Like so many of Duane’s songs, the title track can be interpreted on several levels, as he explains. “Black gold is also oil and we see how precious it is and how much abuse goes on to obtain it; people are suffering and yet we are spending millions on guns, bombs; instead of buying steel to make a house you buy it to make a gun. The song also speaks to the value of our music because it is black gold.”

The value of adhering to what is seemingly an ordained musical mission prompted Duane to embark on a solo career after nearly 10 years as lead vocalist with the band To Isis. Although Duane’s preference for roots reggae sometimes clashed with his band members’ inclination towards a contemporary dancehall sound, he nonetheless approached Dean Fraser about producing a To Isis album. Then one evening it became clear to Duane the time had come to commence a new chapter in his career: he sang “August Town” for a gathering at the Judgement Yard compound in August Town. “The people’s response to that song was just overwhelming,” Duane reflected. “I restarted the song three times without being able to move any further and people started shouting out for it. So that was the charge in the battery to move on as a solo artist and it came right from the community where it all started.

Securing Dean’s expertise for his debut project (Dean’s extensive resume includes contributions to more than 1,000 albums, an extended stint as Luciano’s musical director and production on several of contemporary reggae’s finest releases including Tarrus Riley’s acclaimed Cannon/VP Records release “Parables”) brought Duane invaluable lessons in refining his artistic expression. “Dean said you are a good singer but you have a problem with intonation and timing but I know you can learn it,” Duane recalled. “So I started singing background in the studio. Dean knew my capabilities so I wasn’t allowed to settle for mediocrity; if it means you have to sing something twenty times, then you sing it twenty times. Even with the writing he always drives you to do better.”

Dean helms the majority of the production on “Black Gold”, with assistance from Duane on several tracks, and his exacting standards, as with their previous collaboration, extracts the exceptional performances from this extremely talented singer/songwriter. “Black Gold” opens with “Nah Play”, written by Duane, Sherita Lewis and Mackeehan Solomon (the trio collaborates on several track here), set to an upbeat one drop riddim, produced by Christopher Birch and Raymond Charlton that balances its sobering observations on present-day Jamaica: “how long will we go on with this saga, the place a run with no order/we no inna no war, no, but look how many dead so far and the number getting higher”.

Somber commentary is also featured on “When We Rise”, produced by Kemar “Flava” McGregor and featuring Ras Shiloh. Here both singers detail the positive transformation that’s possible when communities unite to rid themselves of “dons” or area leaders; the song was written months before the Dudus “Coke” extradition affair but lyrical parallels to that saga earned “When We Rise” increased airplay as the drama unfolded in western Kingston throughout the first six months of 2010. “With all that happened here this year it would seem I wrote it about the Dudus situation but it was long before that,” Duane explains. “Basically, it is saying your don is a next man’s menace. You can’t say you are protecting people by turning guns on other people. That’s a joke thing.”

Duane offers an urgent plea to break the repetitive violence on “Cycle Goes On” and his anguished delivery effectively underscores the plight of societies’ most neglected on “Sufferers Heights”. “A record must have a purpose,” states Duane”, and my ultimate purpose is to speak about what is happening but to ultimately leave people with hope.” Besides the threads of social consciousness woven throughout “Black Gold”, Duane displays a deeply romantic side. “Fire In Me” is a sultry declaration of desire, set to a lush one-drop rhythm produced by Christopher Birch and Raymond Charlton; as he scales falsetto heights on “More”, it’s unlikely any woman could resist his intention to be “more than a lustful gaze or a passing phase.”

With “Woman”, Winston Francis’ thoughtful tribute to “God’s greatest gift to man”, Dean’s superb sax solo and Lamont Savory’s graceful acoustic guitar accents frame what Duane describes as “vocally the most challenging song on the album”. “Every note in that song is so beautifully orchestrated, it is almost like a show tune and the more I listen to it, is the more I love it,” he says.

Duane’s sensitive delivery on “Deception”, co-written by Duane and Boltar Montana Solomon details the lies that unfortunately become a part of too many relationships: “he sits repenting for all the wrongs he’s done; she sits pretending that he’s the only one/ the games we play, we’ve lied and we’ve deceived”. He goes on to convey the sorrow required for entry into the “party for the broken-hearted”, adding a lovers rock flavor to Larry Duane Addison’s mid 80s pop-soul lament “Members Only”.

On October 5th 2010, Duane Stephenson was invited to perform at the White House for the ceremony where Secretary Hilary Clinton was presented with The George McGovern Leadership Award for her work to curb global hunger “World Food Program” (WFP).

Duane handles each of “Black Gold’s” various stylistic influences, from ballads to roots reggae, with impeccable skill and the heartfelt sentiments he conveys will surely expand the fans he recruited with “From August Town.” “When we do an album we do music that people can relate to because any situation you find yourself in, chances are someone else has found themselves in that situation. It is real life situations, so the real life emotions come out, that is how it is.”

On October 5th 2010, Duane Stephenson was invited to perform at the White House for the ceremony where Secretary Hilary Clinton was presented with The George McGovern Leadership Award for her work to curb global hunger “World Food Program” (WFP). 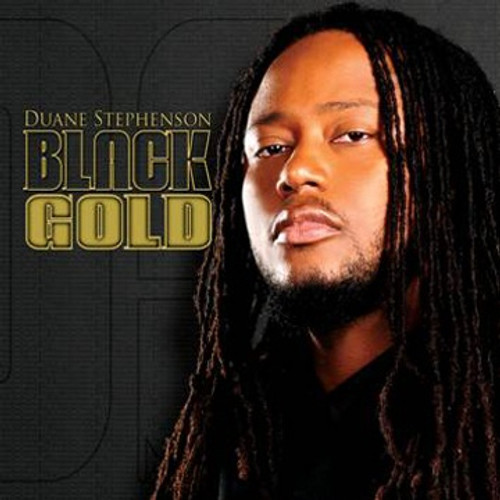